After an early start before sunrise, the Coo-ee marchers started out at 7 am on another long day, covering 31 km.

The Mayor of Dubbo, Cr. Mathew Dickerson, met them on the way, and marched into Dubbo with them. 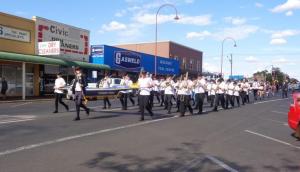 Several hundred people watched them from the footpaths along the streets, with some waving flags.

There was also a good sized crowd at the commemorative service at Dubbo War Memorial, which commenced at 4.30 pm.

The Mayor , Cr. Mathew Dickerson welcomed the Coo-ee marchers, and gave a speech about the Coo-ees arrival in Dubbo 100 years ago. 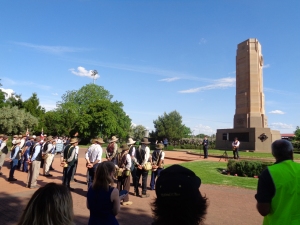 Helen Thompson, Administration/Research Officer for the Coo-ee March 2015 Inc. (Gilgandra Sub-Committee), gave a speech about Joseph Patrick Wallis (also known as Joseph Patrick Wailes) who was one of the 12 recruits who joined at Dubbo, and who was killed in action at the Battle of Fromelles on 19th/20th July 1915, and Wilfred Ernest McDonald, who was born in Dubbo, and joined the Coo-ees at Wongarbon.  He was killed in action on 3rd May 1917, near Bullecourt in France. His name is on the Dubbo WWI Roll of Honour at the Dubbo War Memorial (and also on the Wongarbon Soldiers’ Memorial).

The marchers stayed overnight at Dubbo Showground, and dinner was provided by Red Rooster.

Coo-ee March 2015 Inc. (Gilgandra Sub-Committee) was invited by Dubbo City Council to participate in the Dubbo Centenary of Anzac Regional Sleep-out Parade, which was held at Victoria Park No. 1 Oval in Dubbo on the evening of 24th April 2015.

The Memorial Walk contains ten new plinths, each of which tells a story about local soldiers and significant events relating to Dubbo’s involvement in the First World War.

The new monuments were unveiled by Dubbo Mayor Councillor Mathew Dickerson and President of the RSL Sub-Branch Mr Tom Gray.

One of these plinths tells the story of the Coo-ee March.

On Wednesday afternoon, 13th October, 1915, a crowd of 2000 local citizens had welcomed the Coo-ees as they paraded through town in the pouring rain to the Town Hall, led by members of the Dubbo Town Band and Dubbo School Band, where they had been greeted by the Mayor of Dubbo, and had held a recruiting meeting before their overnight stay, raising 12 new recruits for the Coo-ee March.  Further information about the Coo-ees’ arrival in Dubbo can be found at http://cooeemarch1915.com/2014/01/30/day-4-wednesday-13-october-1915-mogriguy-to-dubbo/

The nearby Cenotaph in Victoria Park also has a connection to the Coo-ees.

An article in The Dubbo Liberal and Macquarie Advocate (28/4/1925, p. 4) about the unveiling of this Cenotaph and the laying of the wreaths ceremony held over 90 years ago on Anzac Day in 1925 reported that the wreaths included a ‘beautiful wreath nearly three foot in diameter, to the memory of the unknown soldier’, and ‘individual wreaths and those to battalions’ which ‘covered the whole of the base on one side of the monument’, and ‘above the wreaths was placed the historic flag which had been carried by “The Coo-ees” in their march from Gilgandra to Sydney’.

Wilfred Ernest McDonald, one of the Coo-ees who was born in Dubbo, and joined the Coo-ee March at Wongarbon, is commemorated on the Dubbo War Memorial Roll of Honour. He was killed in action in France on 3rd May 1917 and has no known grave. His name is also remembered on the Villers-Bretonneux Memorial in France, and on the Wongarbon Soldiers Memorial. Further information about this Coo-ee can be found at http://cooeemarch1915.com/2014/07/01/wilfred-ernest-mcdonald/

A commemorative service is planned to be held by the Coo-ee March 2015 Reenactment at the Dubbo War Memorial on Tuesday, 20th October, 2015.