Coo-ee March 2015 Inc. (Gilgandra Sub-Committee) was invited by Dubbo City Council to participate in the Dubbo Centenary of Anzac Regional Sleep-out Parade, which was held at Victoria Park No. 1 Oval in Dubbo on the evening of 24th April 2015. 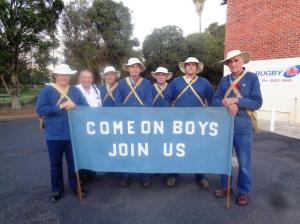 This entry was posted in Parades and tagged Dubbo. Bookmark the permalink.