Before the marchers left ‘Bathampton’ they had their photo taken in front of the woolshed, which is on the site of the old woolshed that the Coo-ees stayed t in 1915.

Marchers in front of the woolshed at Bathampton, on the site of the original woolshed where the Coo-ees stayed in 1915 31/10/2015

The marchers left ‘Bathampton’ at 8am to be taken back to the point where they stopped the march the previous day on Wimbledon Road, and started marching at about 8.30 am.

They stopped at Perthville for lunch.

The marchers arrived earlier than expected at 2.30 pm at Centennial Park in Bathurst, so marched to Bathurst Showground, just as is started raining.

The street parade started from Centennial Park  at 4 pm.   The Scots School Pipes & Drums Band met with the marchers along William Street, on their way to the Bathurst War Memorial Carillon.

Due to the wet weather, the RSL Sub-Branch had decided to move the venue for the commemorative service from the Bathurst War Memorial Carillon to the Bathurst RSL Club. 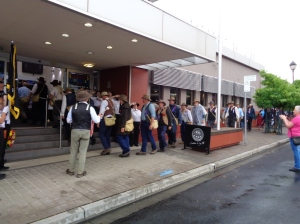 The service started at approximately 4.3o pm, and the Mayor of Bathurst, Cr. Gary Rush, welcomed the marchers. 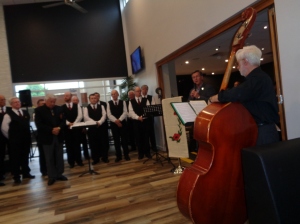 The Macquarie Male Singers sang several songs from the WWI era, including ‘It’s  a long way to Tipperary’ and ‘Mademoiselle from Armentieres’. 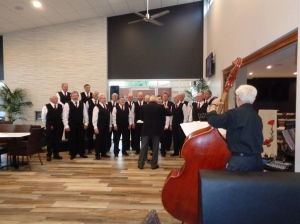 Helen Thompson gave an account of the Coo-ees’ reception in Bathurst in 1915, and spoke about the three Coo-ees from Bathurst who died while on active service during the First World War.

Their names were displayed today on white crosses in the garden bed with red poppies near the Bathurst War Memorial Carillon.

The marchers left Blaynyey from near the Blayney War Memorial where they stopped marching yesterday at 8 am, after a comfortable night at Blayney Showground.

They stopped for lunch at Newbridge.

They finished the day’s marching at the intersection of Wimbledon Road and Bathampton Road at 3 pm (from where they will continue in the morning), then took the minibus provided by Clubs NSW to ‘Bathampton’ property for an overnight stay in the woolshed, which is on the site of the old woolshed that the Coo-ees stayed at in 1915. 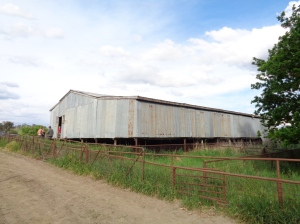 The property owner said that a lot of the material from the original woolshed, such as the corrugated iron roof, was reused in constructing the current woolshed on the same site.