After a rainy night where they slept in the Geurie Memorial Hall, the marchers rose early to enjoy breakfast provided for them by Geurie Lions Club.

The marchers left Geurie at 7 am. 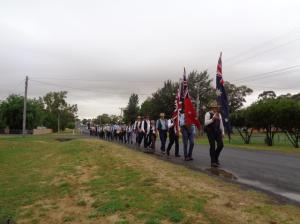 They passed through four private properties to take the back roads to Maryvale Hall, where they stopped for lunch.  Some locals joined them for a cuppa.

The marchers formed up with the Mayor of Wellington, Cr. Anne Jones, and Wellington RSL Sub-Branch members,  for a street parade starting at 5.30 pm down Lee Street and Nanima Crescent to Cameron Park. 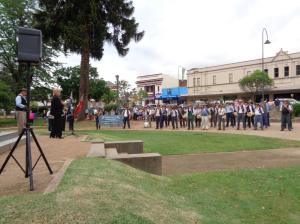 A commemorative service was held at the Wellington War Memorial. Cr. Anne Jones welcomed the marchers, and gave a speech about the 1915 Coo-ee March.

The marchers then made their way to Wellington Showground for an overnight stay.

Wellington Rotary Club provided dinner at the Showground, which was very much appreciated.