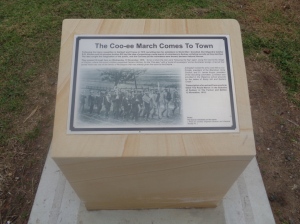 Helen and Stephen Thompson represented Coo-ee March 2015 Inc. (Gilgandra Sub-Committee) at the at the launch of the Anzac Centenary Walk at Mount Druitt Park Remembrance Gardens on Wednesday 22nd April 2015, which was held in a marquee tent at the historic cottage ‘The Manse’, due to flooding of the park from the bad weather experienced at the time.

Helen (Administration/Research Officer for the Committee) had the honour of assisting the Mayor of Blacktown Councilor Stephen Bali, and the Hon. Ed Husic, MP, Federal Labor member for Chifley, to unveil the plaque on a replica of the Coo-ee March plinth, which is one of five new plinths on the Anzac Centenary Walk featuring stories about the people and places with a Mount Druitt or Colyton connection to the First World War. 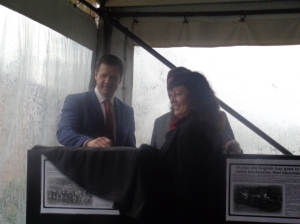 A commemorative ceremony is planned to be held with local officials and community representatives at the Mount Druitt Remembrance Gardens at the Colyton and Mount Druitt Roll of Honour (which is situated close to the Coo-ee March plinth) when the Coo-ee March 2015 Reenactment passes through Colyton on the Great Western Highway on Sunday, 8th November, 2015. It is hoped that representatives from Colyton Public School are also able to attend this ceremony.

Information about the Coo-ees stop at Colyton on their way from Penrith to Parramatta on 10th November 1915, where the school children from Colyton Public School presented them with a sum of money they had raised for the march, and the McGregor recruit who joined them there, and the local young man Clarence Roy Barnett who had ‘linked up’ with the Coo-ees when they passed through Colyton, can be found at http://cooeemarch1915.com/2015/04/21/the-coo-ees-at-colyton-on-their-way-from-penrith-to-parramatta/.