The marchers left Blacktown Showground at 7 am.

Over 600 school children were along the school fence waving flags when the  passed Hilltop Road Primary School on Centenary Road.

A service was then held at 11.10 am at Merrylands Memorial Park War Memorial, in Treves Street, Merrylands, where the Mayor of Holroyd again welcomed the marchers.  Some students from Marylands East Primary School attended this service.

The marchers then marched to Parramatta, and held another commemorative service at 12.45 pm at Parramatta War Memorial at Prince Alfred Square, Parramatta.  The Lord Mayor of Parramatta, Councillor Paul Garrard, welcomed the marchers.

The marchers then marched to Holroyd Sportsground for their overnight stay. 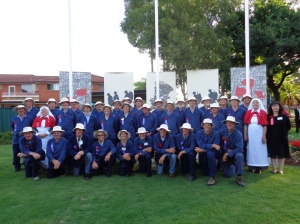 This entry was posted in Memorials and tagged Holroyd, Merrylands, Parramatta. Bookmark the permalink.

One response to “Blacktown to Holroyd Monday 9th November 2015”