The marchers left Springwood at 7.10 am.

One of the marchers was a descendant of David James Wagner, one of the Springwood recruits, and she pointed out the house where he lived when he joined the Coo-ees in 1915.

The marchers made their way down Mitchells Pass, which was closed to traffic during this period.  Photos were taken at the historic Lennox Bridge, which the Coo-ees marched over in 1915.

Marchers on the Lennox Bridge on Mitchells Pass 7/11/2015

A welcome ceremony was held at 11 am at the Old School House in Emu Plains, where the Coo-ees stopped and were given bottles of lemonade by the school children in 1915.

A piper lead the marchers in a street parade down High Street at 12.30 pm, then a commemorative service was held at Penrith Memory Park, which was well attended by the community. 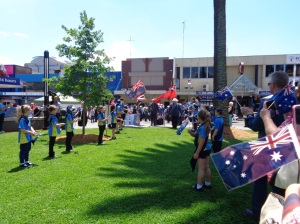 After lunch had been provided to the marchers, they marched to the Penrith Paceway for their overnight stay.

The Mayor of Penrith, Cr. Karen McKeown, and Penrith City Council, hosted a formal function and dinner at the Penrith Paceway for the marchers in the evening.

Two commemorative plaques, one for St Marys War Memorial and one for Penrith Memory Park, were unveiled during the proceedings. 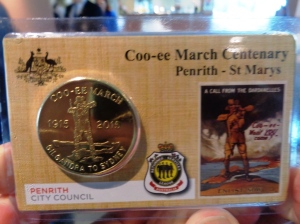 A Coo-ee Chocolate Ration, and  a Coo-ee March Centenary Penrith-St Marys commemorative coin, were gifts provided to the marchers, which were very much appreciated.

Two of the marchers celebrated a birthday today, and were sung happy birthday, and presented with a birthday cake, at the evening function.