The marchers were provided with a hearty breakfast by South Dubbo Rotary Club at Dubbo Showground.

The marchers left Dubbo Showground at 7 am.

Car horns were tooted, and many cars stopped to watch the marchers make their way up Wingewarra Street on their way out of Dubbo.

The students at Wongarbon Public School lined up and waved Australian flags outside their school to welcome the marchers to Wongarbon. 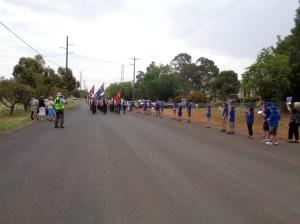 One of the marchers, Rob McDonald, a family member of fallen Coo-ee Wilfred Ernest McDonald, whose name is remembered on the Wongarbon Soldiers’ Memorial,  gave a brief talk, and showed a plaque that had been presented to the McDonald family by the citizens of Wongarbon in 1919. 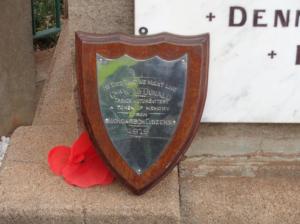 A wreath, which was provided by the Gilgandra RSL Sub-Branch to travel with the Coo-ee March Re-enactment, to rest on the war memorials where the Coo-ees will be remembered in the commemorative services along the route, and then be returned to Gilgandra to become part of the Hitchen House Military Museum, was layed at the Wongarbon Soldiers Memorial. 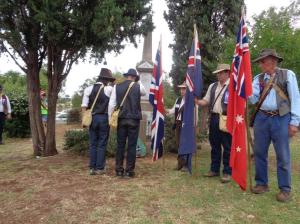 After lunch at the Wongarbon Hall prepared by the Wongarbon Public School Parents and Citizens’ Association (P& C), the marchers left Wongarbon at 1 pm to travel onto Geurie. 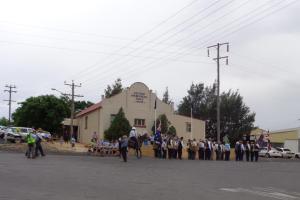 A commemorative service was held in front of the Rolls of Honour at Geurie Memorial Hall at 4 pm.

This entry was posted in Uncategorized. Bookmark the permalink.