The start at Gilgandra on Saturday 17th October 2015

The start at Gilgandra

At 7 am the Coo-ee marchers enjoyed sausages, bacon and eggs for breakfast, provided by the Lions Club at Hunter Park.

At 9 am the Coo-ee marchers attended a church service with the community at St Ambrose Church in Myrtle Street in Gilgandra.

At 10.45 the official farewell was given at the commemorative Coo-ee March cairn in Bridge Street, which marks the spot where the original Coo-ee March commenced. 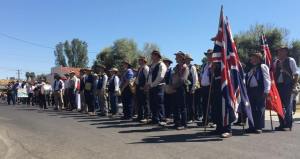 Official farewell in Bridge Street at the spot where the 1915 Coo-ee March started.

At 11 am the Coo-ee March 2015 Re-enactment commenced with a street parade from Bridge Street into Miller Street onto the Newell Highway to the Coo-ee Mach Memorial Park gateway, where a commemorative service was held in memory of the 35 men who joined the Coo-ee March from Gilgandra.

Brian Bywater then planted a tree near the Coo-ee Heritage Centre.

The Coo-ee marchers then marched out of Gilgandra at 12 noon, starting their long trek to Sydney, in the footsteps of the Coo-ees who left Gilgandra 100 years ago on 10th October 2015.

The marchers arrived at Balladoran for their overnight stay  at 5 pm.

This entry was posted in Events and tagged Gilgandra. Bookmark the permalink.